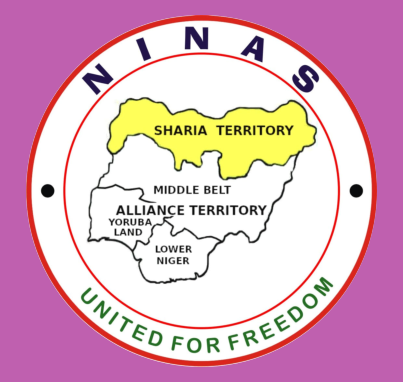 NOTES ON THE SELF-DETERMINATION GOAL OF THE NINAS CAMPAIGN AND THE FORMATIONS FOR THE REINSTATEMENT OF SUPPRESSED SOVEREIGNTY.
NINAS Secretariat, Dec 2, 2021.

As we advance towards the terminal stages of the Processes for the Reinstatement of Self-Determination and Sovereignty to the Peoples of the NINAS Alliance Territories, (South & Middle-Belt), trapped in the Failed Lugardian Experiment of 1914, whose SOVEREIGNTIES are currently Suppressed and Subsumed under the SUZERAINTY  of Unitary Nigeria, erected by fiat upon the Fraudulent 1999 Constitution of Nigeria, it has become necessary to once more shed some light on the Formations in which the Reinstatement of Suppressed Sovereignties are being undertaken.

From the onset, as can be verified by a review of all our Public Communications Documents including Audiovisuals over the years, the Goal of the entire intervention we have driven since 1999 as PRONACO, MNN and NINAS, had always been to deliver the Sovereignty of the Peoples of Nigeria back to them.

Subject to Referendums and Plebiscites, the Formations in which the Sovereignties would be pursued and taken back are also clearly articulated, hence the Maps that accompany our Propositions at each stage.

Prior to the emergence of the NINAS Map which shows a Four-Bloc internal Delineation, the MNN Map of Nigeria, Broken into Four Blocs, has been in the Public Domain since the 2007 Court Suit Challenging the Legitimacy of the 1999 Constitution.

That 4-Bloc Map represent the Formations in which the inevitable Union Reconfiguration that would follow from the demise of the irreversible 1999 Constitution is being Discussed and Undertaken, all the way to Referendums and Plebiscites.

Just like the Question of Geographical Formations for Aggregating, the Degree of Autonomy Desired by the Peoples of each of the Blocs in the NINAS Alliance will also be Determined by Referendums and Plebiscites. (The two questions, ie Geographical Formations and Degree of Autonomy, can consolidated for resolution in the one Referendum or Plebiscite)

These Notes of Clarification became necessary as a response to what seems like a confusion (real or contrived), regarding the Formations in which the Peoples of each Bloc in the NINAS Alliance will step into their FREEDOM when the Bondages of Unitarism and Suzerainty masquerading as Nigeria are Broken as well as the Degree of Autonomy represented by the Self-Determination being sought on their behalf by NINAS and its Constituent Components.

All other arrangements regarding relationships between the various Blocs in the NINAS Alliance, will be undertaken in Freedom and Self-Determination, meaning that such arrangements will be determined strictly by agreements Freely Reached by the Blocs, not by fiat or any form of imposition.

(May we request that those who understand these clarifications to please explain to others who may not. It is an important part of the Liberation Campaign to Educate and Enlighten the People seeking the Liberation as it has become clear to us that the ignorance of most of our People has been a great obstacle on our Path to Freedom and that ignorance is being exploited by sundry mischief-makers for all kinds of purposes including quick gains)

This entry was posted in Local News. Bookmark the permalink.